This page provides some details of the data infrastructure required to support the MDR. It also outlines the structure of the individual databases used at each stage of the extraction process (most of which are very similar) and describes when and how they are constructed, and how references across databases are established and removed as necessary. Links are provided to individual code segments that build the main tables involved. 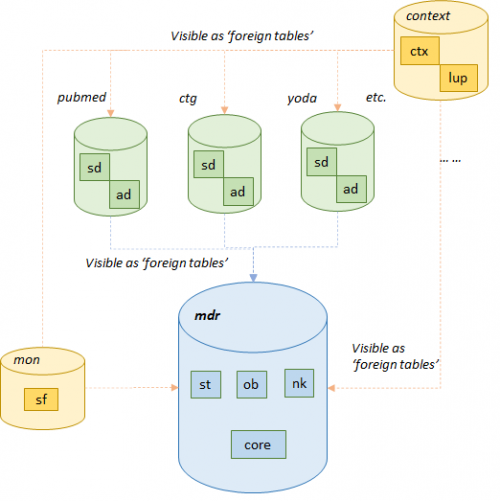 The MDR system is based on PostgreSQL. In Postgres data is held within multiple databases, each of which can be subdivided into different data schemas, or groups of related tables. Tables in each schema have a different prefix, separated by a '.' before the table name.
The main databases required are (see figure 1):

In more detail, the schemas required are:

Figure 2: Databases on the PostgreSQL installation

The list of databases that emerges is shown in figure 2, which shows the PostgreSQL installation, with the context, mon and mdr databases, and then a DB for each source (as of October 2020).

Postgres allows direct links between schemas in the same database - for example queries can be written that reference tables in different schemas. Having 4 schemas within the main mdr database - st, ob, nk and core - simplifies the interactions between these data stores. Postgres does not allow, however, simple references between databases. Instead schemas from an external database can be imported as 'foreign tables' (not copies but references to the source tables and their data) into pre-existing schemas in the importing database. By convention these foreign table schemas are distinct from the 'native' schemas and data, and usually take the same name as the source schema.

In the data systems required for the MDR, each of the source specific databases and the mdr database requires the mon (logging tables), the lup (look up tables) and ctx (context data) available as 'foreign tables'. In that way it is necessary to store only one copy of this important system or contextual data.
In addition the central mdr database, as well as its 4 native schemas, needs the ad schemas of each of the source databases to be available as foreign table schemas, so that the data can be easily transferred during the aggregation process.

Rather than fill the system with these additional imported 'foreign table' schemas, which in some cases could overwhelm the 'native' schemas in each database (for instance the mdr database needs to be able to access every one of 20 - in the future many more - source ad schemas), the data extraction system sets these foreign table links up as temporary features during a particular process, as required, and then tears them down again at the end. Typical code for this operation is shown below. In the aggregation process, each source is considered in turn, and a temporary set of foreign tables representing the ad tables of that source (or for the mon database the sf tables) isestablished in the mdr database to enable data transfer. The operation is carried out by constructing a series of SQL statements that are executed using the Dapper micro-ORM (conn.Execute()), in the context of a connection to the relevant database, (connString, username and password are all established within the containing class's constructor). The foreign table schema name is returned from the function, to be fed back as a parameter in later transfer routines.

At the end of each source specific transfer the temporary schema and its foreign tables are destroyed, leaving the way clear for the next set of source tables, and keeping the mdr database 'clean' and relatively uncluttered by additional schemas:

The structure of the tables in the sd and ad schemas of each source, and that in the mdr database, (split between the st, ob and nk schemas or combined in the core schema), is very similar. This is to make data transfer between these tables as simple as possible.
The final 'core' schema in the mdr is considered below, and then the differences between this and the other schemas and databases are described.
The core schema has 18 main tables - 6 that are concerned with study data, 11 that hold data object data, and one that connects the studies and data objects tables. (The core schema, but only the core schema, also has 2 very simple tables, not shown in figure 3, that hold the json strings derived for studies and data objects respectively). 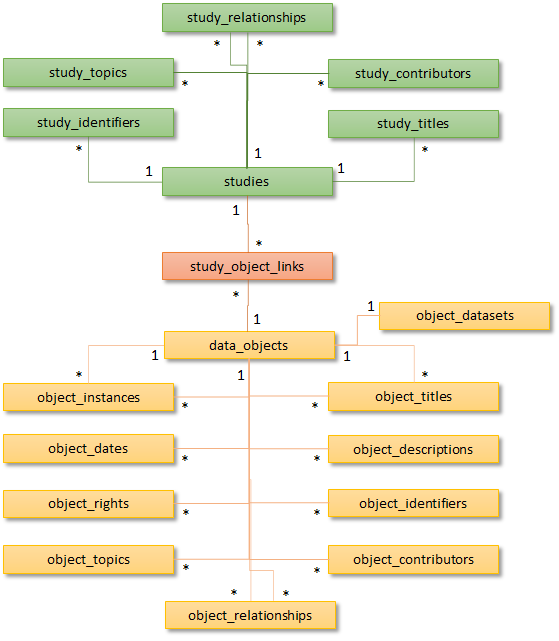 The 6 'study tables' comprise studies itself, and then

As shown in figure 3, there is a one-to-many relationship between study records and the records in these tables. In the case of study_relationships there are two such joins - one for the 'subject' and the other for the 'target' study of the relationship. All the study tables have a foreign key (study_id) which links them back to the central studies table.

The 11 'data object tables' include data_objects itself, plus

All the object tables have a foreign key (object_id) that links them back to the data_objects table. The relationship is again one-to-many, with the exception of the object_datasets table, which has a 1-to-1 link with data_objects, and the object_relationships table which has two joins - for the 'subject' and 'target' objects respectively. The object_datasets fields could be incorporated within data objects, but as only a relatively small proportion of the total data objects are datasets it is much more efficient to factor this data out as a separate table.
As shown by figure 3, the two groups of tables therefore form 2 clusters, one around the studies table and the other around the data_objects table. Each cluster corresponds to the central entity, studies or data objects, with its repeating attributes, as defined by the ECRIN metadata schema. The clusters are joined by a central study_object_links table, which holds the many-to-many relationships between studies and data objects.

The tables are created, in the core schema and elsewhere, by calling a series of SQL statements from the C# code. Each statement, one per table, is passed along in a Dapper call to the PostgreSQL database to be executed (tables, if they exist, are always explicitly dropped beforehand). The code for creating the core tables, which includes the detailed definition for each field, can be found at core table creation code.

Differences between core and other schemas

In some ways the core schema is the simplest schema in the system - it represents the 'end-product' of the extraction pipeline and is the closest to the metadata schema. Although the other schemas include broadly the same tables, with the same data fields, the following lists some of the ways in which those other schemas differ from this core pattern.

Backing up the data and the databases